Kid David Talks ‘Step Up: All In’ & Everything In Between

David Shrei­bman aka Kid David is a phenomenal dancer and actor with a big heart.  David can be seen next in Summit Entertainment’s new film Step Up: All In.  The film premieres in theaters July 25th.  Along with starring in past films, Battle of the Year and Disney’s Lemonade Mouth, Kid is recognized as one of the world’s leading B-boy’s and principal dancers, known and having been invited to compete everywhere from Asia to Africa, Australia, Europe, and South America.

He recently shared with me about his dancing, the film and his cause.

L’Etage: When did you realize your body could move like it does?

Kid: I was always a little bit of jock, was also born pretty flexible, so fortunately I’ve always able to do what I wanted with my body.  When I started to dance everything felt so natural and easy.  The mix of creativity and athleticism drew me to the craft.

L’Etage: How does it feel to do what you love? Does it feel like work or play?

Kid: Sometimes dancing can feel like work – other times play.  Some jobs are more fun while others have more integrity, as dancers we just have to remember dancing is our job and we should be grateful for that, have fun with it.

L’Etage: Why are you called Kid David?

Kid: I was a such a little guy when I started,  and I stayed little… lol   I was ten years old when I began, dancing along with the fifteen to eighteen-year-olds I was hanging with.  Not to mention, I looked ten until I was about eighteen.  Hence Kid David. 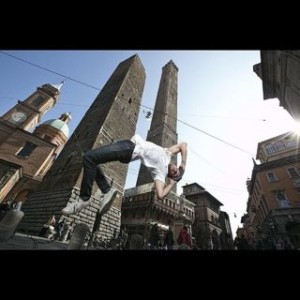 L’Etage: Tell me about Step Up: All In.  What is the film about?

Kid: Step up: All In is a movie about bringing the crew back together.   A lot of characters from the past films are coming back and joining up to form the ultimate squad. There are epic dance pieces and hilarious scenes.  To me, this is the best one yet. There are some nice twists too.

L’Etage: Who do you play?

Kid: In this film, I play a character named Chad. He is a ballroom dance teacher at the studio Moose’s grandparents own. After watching the crew day after day, he finally gets the balls to ask to be in the crew.  We later realize that Chad is not just a creepy ballroom teacher that hits on old women all day, but that he can actually throw down.  Chad is a ridiculous character.  He’s a ballroom dancer by day, bboy by night. In his mind, there is no one more handsome or awesome then ‘the Chad’.

L’Etage: Tell me about your outreach to Uganda. How did you choose this charity?

Kid: I have worked with a couple of charities in Africa. One is Falling Whistles. They are a group of activists from LA that created a movement to help fight the war in the CONGO. They sell whistles (representative of the whistles the kids, too small to hold guns, have on the combat field) to raise money to fight this war. I try and do what I can through my dance projects to help fundraise money and help in whatever way I can, whether it’s sending clothes, old gear or even videos.

There is also Break Dance Project Uganda. They are an organization in Uganda that helps bring ‘breaking’ to the local kids, in hopes to give them an outlet away from the very real struggles that they are forced to deal with.

L’Etage: What is your philosophy on art in society?

Kid: I think art doesn’t hold a high enough value in society.  There was a point in our history when art was what separated societies, even more the only real product of some societies.  I believe its value should have a greater presence in our current school systems.

To me, it’s one of the driving forces that make humans so special.   Art needs to be important in society, without it our world is ugly.

You can stay in touch with David by following him on Twitter: https://twitter.com/Kiddavidrr

Here’s Step Up: All in trailer: