An American, and Biblical proverb was proven the other night when Michelle Obama stood before the crowd at the Democratic National Convention delivering us in a speech: “a house divided against itself cannot stand.” The infallible and trustworthy FLOTUS delivered a speech last night that lifted the consciousness of the American people from horizontal warfare to vertical understanding. Michelle Obama’s speech was laced with thought and emotion that depicted the present “bigger picture” that many Americans had either been depending on being ignored or were incapable of seeing with the urgency of social and national crisis.

Michelle Obama stood before DNC attendants in Philadelphia bearing her conscious. She traveled through television channels to the dinner tables and hearts of the American people to deliver an honest speech in support of Hillary Clinton. Michelle, the mother of our nation, model of our society, and author of poise is perhaps the most innocent Democrat in the eyes of the American people. As such, Michelle brought a divided audience to their feet in Philadelphia by speaking not just as the First Lady, but as a mother of two daughters who would not allow our national rhetoric to be shifted to a collage of hate speech and dishonesty.

Michelle’s measured and open speech delivered every necessary word with the authority of authenticity. “When they go low, we go high,” was applied as Michelle spoke the words. She spoke with an informed empathy of a mother, of a woman, of a First Lady of the United States. Her “village-rhetoric” echoed with representation and presence when she said, “they know it takes a village.” Michelle’s perspective was compelling as she spoke of her daughters, and said of the upcoming election: “every election is about who will have the power to shape our children for the next four or eight year of their lives…” Michelle Obama’s speech was a clear call to awareness.

The FLOTUS never mentioned Donald Trump by name. As someone who spoke knowing ‘the power of the tongue’ she did not mention the Republican candidate in relevancy. The audience who has seen FLOTUS jamming in the front seat of James Corden’s car with Missy Elliot; has followed her Let Girls Learn Campaign on Instagram, her encouragement and empowerment on Snapchat; and has listened to her words of wisdom “people won’t remember what other people say about you, but they will remember what you do,” was aligned for conviction in the face of her punctuate words.

After years of grace, poise, and success as the woman of the White House, Michelle Obama gave a speech supporting Hillary Clinton for president. She emphasized the need to elect a president with whom we could entrust the future of our children and appealed to the consciousness of the American people. 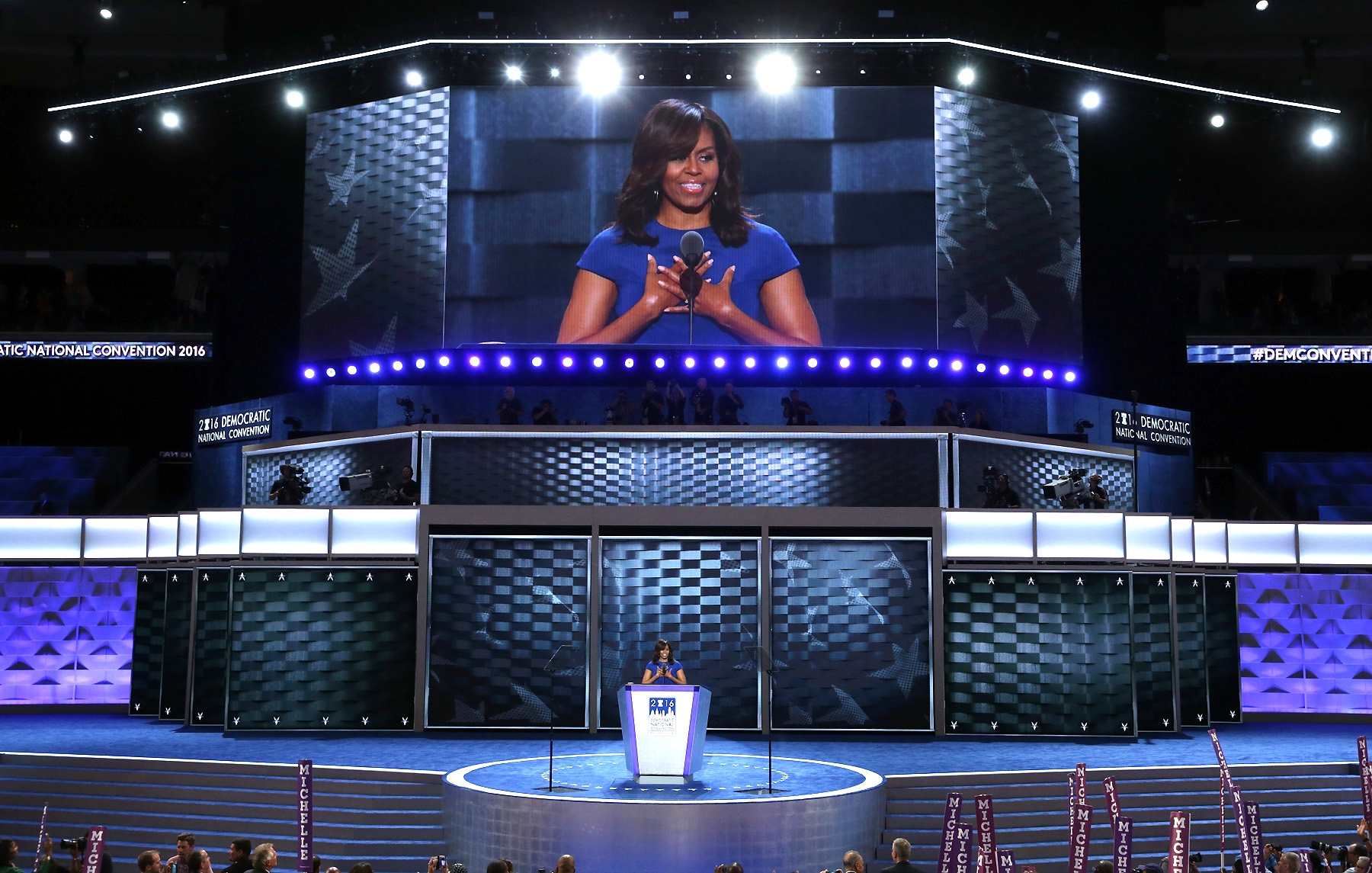 “I want someone with the proven strength to persevere…Someone who knows this job and takes it seriously. Someone who understands that the issues a president faces are not black and white and cannot be boiled down to 140 characters. Because when you have the nuclear codes at your fingertips and the military in your command, you can’t make snap decisions. You can’t have a thin skin or tendency to lash out. You need to be steady and measured and well-informed.”

“I want a president who will teach our children that everyone in this country matters. A president who truly believes in the vision that our founders put forth all those years ago, that we are all created equal. Each a beloved part of the great American story. And when crisis hits, we don’t turn against each other. No, we listen to each other. We lean on each other because we are always stronger together.”

“I wake up every morning in a house built by slaves, and I watch my daughters, two beautiful and intelligent black women, playing with their dogs on the White House lawn,” FLOTUS said. “And because of Hillary Clinton, my daughters, and all our sons and daughters, can take for granted that a woman can become president of the United States.”

“Don’t ever let anyone tell you that this country isn’t great, that somehow we need to make America great again because right now this is the greatest country on Earth,” she said. “And as my daughters prepare to set out into the world, I want the leader who is worthy of that truth.”

The speech ended with the convention standing, in a united upright praise of the First Lady of the United States’ words. Michelle Obama certainly unified her listeners’ pipe dreams: Michelle for President, 2016.