“Hyper-texture”, a word which for this writer in the umbrella of pictorial morphologies should it come to describe aesthetic developments, he should most like to see it stand for the transversal conversation between silicon simulation and the tactile plastic arts and disciplines.  While for the foremost stage for such progressions one usually turns to painting, sculpture and even computer art, as works in the fine arts, which usually, lend themselves easily as a laboratory for writers to explain phenomena and occurrence (with works like Frank Stella’s digital pictures of puffs of cigar smoke realized in stainless steel real physical works imitating their mimetic counterparts).  The occurrence of such an aesthetic category has correspondingly appeared in the accoutrements of architecture with Robert Irwin’s Grasscrete, in cartoonish movie landscapes such as in Aeon Flux from the comic book of the same name starring Charlize Theron and now in high fashion with the works of the young Israeli fashion phenom Noa Raviv.

When it comes to the Metropolitan’s Costume Institute, it is a usually a perennially easy read, there is a theme to the exhibit and what the celebrities wear to the gala benefit is more often than not directly correlative and or reflective of the exhibit’s subject,  However, this year’s Manus X Machina many celebs didn’t seem to get it.   Did this mean man woman or supermodel should come as a robot or as the intellectual suppositions expressed in the wall text which they probably had not read yet.   This writer personally did not understand what they were talking about  until visiting in the very last week of its run.  When finally attending he realized that it was about the clothes themselves and whether now high fashion is rendered by hand or machine or both.  Then, there, lo and behold garments are being 3d printed including those by Israeli designer fresh out of design school, Noa Raviv  with the technology of Stratasys bringing 3d computer grid patterns to life as garments.   Wow!  Hypertexture is Walking the Runway!!! 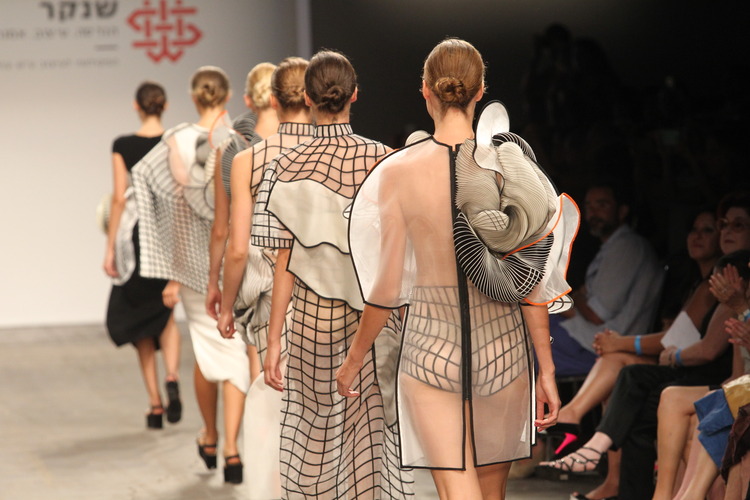