Iggy Azalea has come a long way from “No money, no family, sixteen in the middle of Miami.” For starters, the popular and widely recognized  Australian rapper has since released numerous hits and her newest song “Team” is steadily climbing the charts and taking over the radio. She’s now twenty-five and in Miami celebrating gay pride as Grand Marshal Elvis Duran’s guest of honor! The two spent the entire weekend together, partying and catching up on all the changes in Iggy’s life. 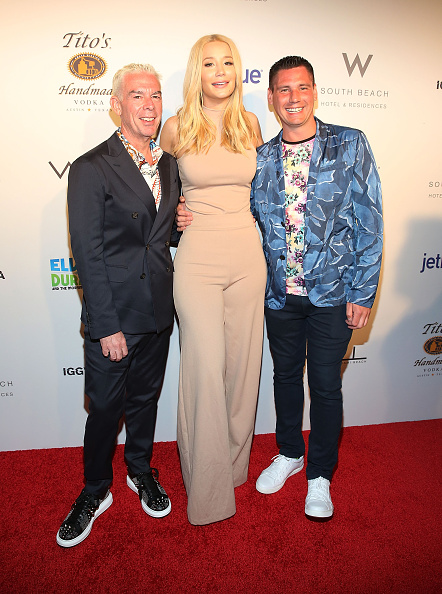 Saturday, April 10, Duran and Azalea hosted the official Pre-Pride Party at W South Beach’s Wall Lounge. And to top off the amazing music and light show, Elvis surprised the superstar with a performance by drag queens dressed like Iggy! In honor of Pride, they performed to her songs “Fancy,” “Team,” “Black Widow,” and “Work.” Both the crowd and Azalea went wild. “That was amazing! They were all amazing!” said the superstar, “They were really good they were very well rehearsed. Some of them were performing it better than I do and I was taking notes!”

Despite the controversy surrounding the rapper about cultural appropriation and racial insensitivity, it was encouraging to see her recognize and support the LGBTQ community. On Sunday, April 11th, She and Elvis led the Gay Pride procession on the Y100 float, greeting fans as they passed by. Hundreds of allies and gay rights advocates gathered on Ocean Drive for the parade, jamming out to Iggy’s new single “Team.”

“I said to you we have to do this every year! It was so much fun!” Iggy gushed about her experience. “I went back to my hotel room and I was showing everyone the Sydney Pride and I was like, ‘We need to go to this too! We need a float! Every year!” Miami’s gay scene has always been present but has come a long way since its status as an eccentric minority. And events like this help bring awareness. Even now, with the legalization of gay marriage, there are numerous issues to tackle.

The festivities were followed by an honest and down to earth interview of Iggy on Y100’s The Morning Show to recap the weekend’s events. She also dished on her upcoming album Digital Distortion, her love of horses, and why she doesn’t drink anymore. Her responses were funny and authentic. When asked if she’s bothered by always being in the press, Iggy said, “Most of this stuff is made up, though! Like the other day they were saying, ‘Oh Nick [Young] is trying to beg for Iggy’s apology and he bought her a $4 million ring!’ and I was like, ‘Where’s my $4 million ring?’ … Nick walked passed me in the kitchen and I was like, ‘So you got me a $4 million ring?’ and he was like, ‘Yeah right, no!’”

It left us with the impression that the rapper is much different than some of the media might suggest.