On Friday, March 11th, 2016 – for the first time in six speckled years – the prodigal son of progressive rock returns to the ‘stage’ that reared his legendary career. Bringing the same soul to his ballads as ever before, the Brit-born singer, songwriter, and Genesis frontman now adds another dimension to his musical prowess: heart, as his Little Dreams Foundation kicked off its Second Annual Dreaming on the Beach Gala at the Fillmore Miami Beach.

It had been a long time runnin’ since the four-city tour back in 2010 supporting his last studio album, Going Back; Collins’ return was short and sweet. The abbreviated performance seemed a little more than a one-off, but Collins’ comeback reaches at the peak of his announcement that he will be coming out of retirement – however, only doing some shows and writing music, not through tour. 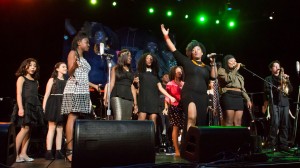 Little Dreams Foundation, Dreaming On The Beach, Benefit Gala on March 11th, 2016 at The Fillmore in Miami Beach. (Photo by MagicalPhotos / Mitchell Zachs)

“It’s very difficult for me to explain properly, but I wanted to get away from music because you become something that isn’t necessarily who you are and so much of the information is wrong, so you just want to rub the blackboard clean and start again; so I just kind of disappeared. Then I kept meeting people that said “when are you going to come out and do something because we miss you,” and I thought that’s nice, maybe I should,” recounts Collins.

His somewhat abrupt exit was propelled by a much more ominous outlook: doctors confirmed that he had been suffering from dislocated vertebrae coupled with significant nerve damage to his hands, assuring that playing the drums was next to impossible. However, according to Collins in our recent interview, he’s on the mend; though a fractured foot following a complicated back operation late last year has him presently relying on the support of a cane to get by – this performance included.

Nonetheless, his apparent lack of mobility didn’t stop the icon from doing what he does best- performing one hell of a show with unparalleled skill. Joined by a brethren of the usual suspects, including Genesis touring guitarist and longtime collaborator on Collins’ solo works, Daryl Stuermer, and new ones- namely Collins’ 14-year-old son, Nick on drums, the stage evolved a familiar vibe that got the party going. 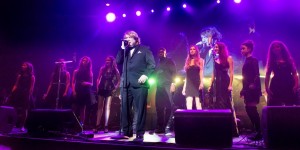 Little Dreams Foundation, Dreaming On The Beach, Benefit Gala on March 11th, 2016 at The Fillmore in Miami Beach. (Photo by MagicalPhotos / Mitchell Zachs)

Over 2,000 guests gathered for the impeccably-orchestrated symphony of music pioneers, generous philanthropists, and 2016 graduates of Little Dreams, all of whom harmonized in perfect accord to support its mission of providing opportunities to aspiring talent across music, art, and sports through personalized mentorship. In a momentous display of reverence for the cause, ambassadors and friends of the foundation hailing from near and afar came out to lend their support, including Rock & Roll Hall of Famer Sam Moore, R&B singer Betty Wright, award-winning Latin songwriter Rudy Perez, neo-pop artist Romero Britto, and Miami’s own DJ Irie, who emceed the evening’s festivities. Other VIPs who made an appearance to champion the cause included Melky Jean, Adriana De Moura, Bruce Orosz, and Paul Sutin.

The show carried into the night, culminating with two covers: first, a take on “My Girl,” followed by an upbeat rendition of Collins’ reggae-styled “Knocking on Heaven’s Door.” For the grand finale, Collins’ evocative stage presence was only eclipsed in part by the rest of the night’s performers, including Spanish singer Alvaro Soler, Foreigner vocalist Lou Gramm, 3-time Latin GRAMMY® winner Diego Torres, and WYK band, all of whom joined in as the Little Dreams Foundation took center stage.
In a dark hiatus that has finally come full-circle, Collins himself admits that it’s time to be rediscovered- but his resounding legacy now takes on a much different note: one not marked by a reflection of his former glory, but that of a more enduring kind in affording future generations the platform to transform their ‘little dreams’ into bigger realities.
The Little Dreams Foundation was established by Phil and Orianne Collins in February 2000 as vehicle to fulfill the dreams of young, aspiring talent who wouldn’t otherwise have the financial means to achieve their goals. In order to execute its mission, the Little Dreams Foundation is advocated by numerous godparents, sponsors, and technical advisors, all of whom nurture growth through mentorship, while providing opportunities that would be otherwise prove inaccessible. For more information, please visit www.ldf.cc. 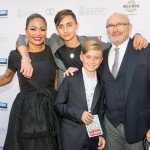 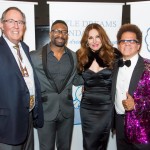 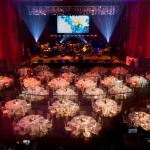